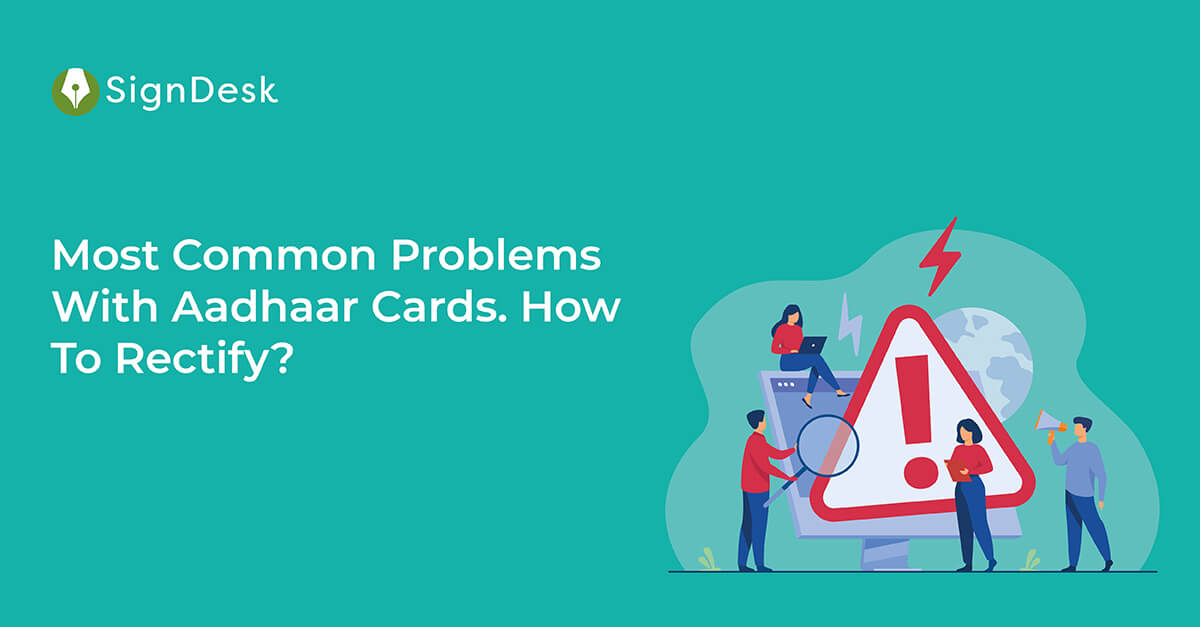 Aadhaar is here to stay for the long run, although there are still a few kinks that the centre needs to work out. As some of these problems with Aadhaar makes it less-efficient than it actually is.

These problems affect the end user that is the person availing Aadhaar services.

Certain issues such as biometric authentication validation, more accountability, better protection of data, error minimization, linking with other accounts and better overall security are being handled by the Government.

But, in order to achieve these rectifications, we must first understand the problems.

Some of the key problems associated with Aadhaar are:

Sometimes, an individual may have to run his scan against the Aadhaar database up to 10 times before getting a valid match. This is time-consuming and lacks accuracy.

Biometric authentication is mandatory (JIO, food grain programs, etc.) in few cases with the presence of the aadhaar applicant.

If such data could be recorded, then we can get useful information. This can be with respect to which authentication method has the most error frequency, what needs to be fixed and what methods are people using the most.

This information has to be accessible to the public, otherwise, no one will be held accountable.

3. Protection Of Information And Data

Many cases where sensitive Aadhaar identity information and demographic information was leaked and made public.

There have also been instances where Bank accounts linked with Aadhaar accounts were vulnerable to hacking and information leaking.

The Government has taken several protective measures to prevent this from happening.

Errors are the most common form of mistakes in not just Aadhaar but also PAN, Passports, DL (driving licenses), etc.

Such errors in prime ID proof documents make it impossible for any individual to avail of certain services. Some of them might be essential to him or her making it invalid proof of address/identification.

Rectifying these errors will certainly take ample amount of time from an individual from their routine.

There is no guarantee that an individual will receive his or her Aadhaar card after application.

There have been quite a few reported cases of individuals not receiving their Aadhaar because of rejected application, lost in transit, delivery negligence, or the centre does not facilitate delivery.

An individual waiting to collect his or her Aadhaar card usually doesn’t have enough direction or information.  The place to collect the Aadhaar card, contact person, and helpline for queries is still unknown to the public.

6. Linking With PAN (and other accounts)

The Center has made it mandatory for all individuals to link his or her PAN (Permanent Account Number) account with Aadhaar to file and pay tax returns in India.

It is mandatory to provide full name of the individual while filing for PAN.

This creates a unique problem for a certain demographic (South Indians) because South Indians use initials (abbreviation of a name into a single letter/letters) after or before their name.

This leads to a mismatch between an individual’s Aadhaar and PAN account. This will require an individual to change his or her name on either the PAN or Aadhaar card.

The Aadhaar centre had posted the picture, in hopes of getting more people to register for Aadhaar services.

As a result, the agency is blacklisted for 10 years.

Errors are common (although, they shouldn’t be) when filing for Government documents.

Common errors might include by the applicant while filling Aadhaar form, by the issuing authority, by the publishing/printing partner, a transcription error, initials in names, etc.

The picture and the gender are opposite for example, the picture of a male boy but the gender says female or vice-versa.

This is not always clearly indicated unless there is an obvious discrepancy between age and photo in an Aadhaar card.

For example, the spacing between your first, second and third name could lead to a name error and will need to be rectified too.

Address errors and incomplete addresses are pretty common errors too. As these are difficult to spot by an agency or authority.

Generally, an incorrect address may not lead to failure in the delivery of service or identity authentication. Incorrect address will receive the Aadhaar card but with no impact.

An error that may show husband as the father, or an interchange of names between a child and his or her parent/parents. Other errors in relationships could show miss-spelt relative names.

All errors can be rectified online just by logging in to the Aadhaar Self Service Update Portal by entering the Aadhaar number, the OTP and selecting the error that needs rectification.

After selecting the error and making corrections, an individual must upload scanned documents for proof of identity and proof of address that should reflect the updated or rectified changes.

This same facility enables an Aadhaar holder to link his or her PAN account with Aadhaar.

We recommend you to read our article on UIDAI’s Latest steps to solve Aadhaar related security concern and What is Aadhaar eKYC and it’s advantages.

As discussed above, you may have an error in your Aadhaar card and to avail of public services, link Aadhaar with PAN, use Aadhaar as a proof of identity, etc, it is essential that you match the details of your Aadhaar card with your other documents and ensure the accuracy and correctness of your personal information.

With the online correction service, it shouldn’t be too difficult for an individual to rectify errors in his or her Aadhaar.