The Unique Identification Authority of India (UIDAI) stated in a circular that it has classified AUAs (and KUAs, wherever it’s applicable) into two categories namely Global AUAs and Local AUAs.

This is being done to ensure the security of Aadhaar numbers. The circular also clarified that Virtual ID and UID Token can be used instead of Aadhaar number in most cases as they are aliases of the 12-digit unique identity number.

Categorizing of AUAs Leads to Enhanced Security of Aadhaar Numbers

As of now, residents are required to share their Aadhaar number in order to authenticate their identity so as to avail various services.

With the implementation of VID or Virtual ID, an Aadhaar holder need not share their Aadhaar number at the time of authentication of identity while availing a service.

The provision of one’s VID instead of their Aadhaar number prevents the collection of Aadhaar numbers by various agencies which result in heightened security, according to the UIDAI.

The Authority also said that it will re-evaluate the list of Global and Local AUAs from time-to-time in order to ensure the security of the Aadhaar numbers.

An AUA or Authentication User Agency is a requesting entity that submits Aadhaar number and either demographic or biometric information of an individual to the Central Identities Data Repository (CIDR) for authentication.

The CIDR confirms whether the information submitted by the AUA is true or false without giving out any information related to the person’s identity.

There are certain AUAs like banking institutions, financial institutions, etc, that are bound by specific laws to authenticate their customers with the help of their Aadhaar numbers.

However, some AUAs do not have the required security system in place to ensure safe usage and storage of Aadhaar numbers.

This is why the AUAs are categorized into Global and Local AUAs.

What Changes Must AUAs Incorporate to Retain Their Authentication Services?

In order to enhance the security of the Aadhaar number and incorporate the necessary changes in the system, Virtual ID, UID Token, and Limited e-KYC will be used. According to the UIDAI, all AUAs are required to make the following changes in their authentication systems and switch to the new system by July 1, 2018.

Failing to comply with these new norms by July 1st would result in the suspension of authentication services and the imposition of monetary fines.

The UIDAI had mentioned that it would share updated API/technical documents, guidelines, and conduct workshops or training sessions for the AUAs and KUAs to make sure that the process of implementation can take place in a smooth and timely manner.

All the AUAs/KUAs need to submit a compliance report to the UIDAI as soon as they update their systems the new APIs.

The UIDAI so far has classified 141 Global AUAs and 23 Local AUAs. The AUAs that have been already been classified into the two categories are mentioned at the end of this article.

In order for the other AUAs to be classified as Global AUAs or Local AUAs, they are required to submit a form containing certain information to the UIDAI through the form attached below. 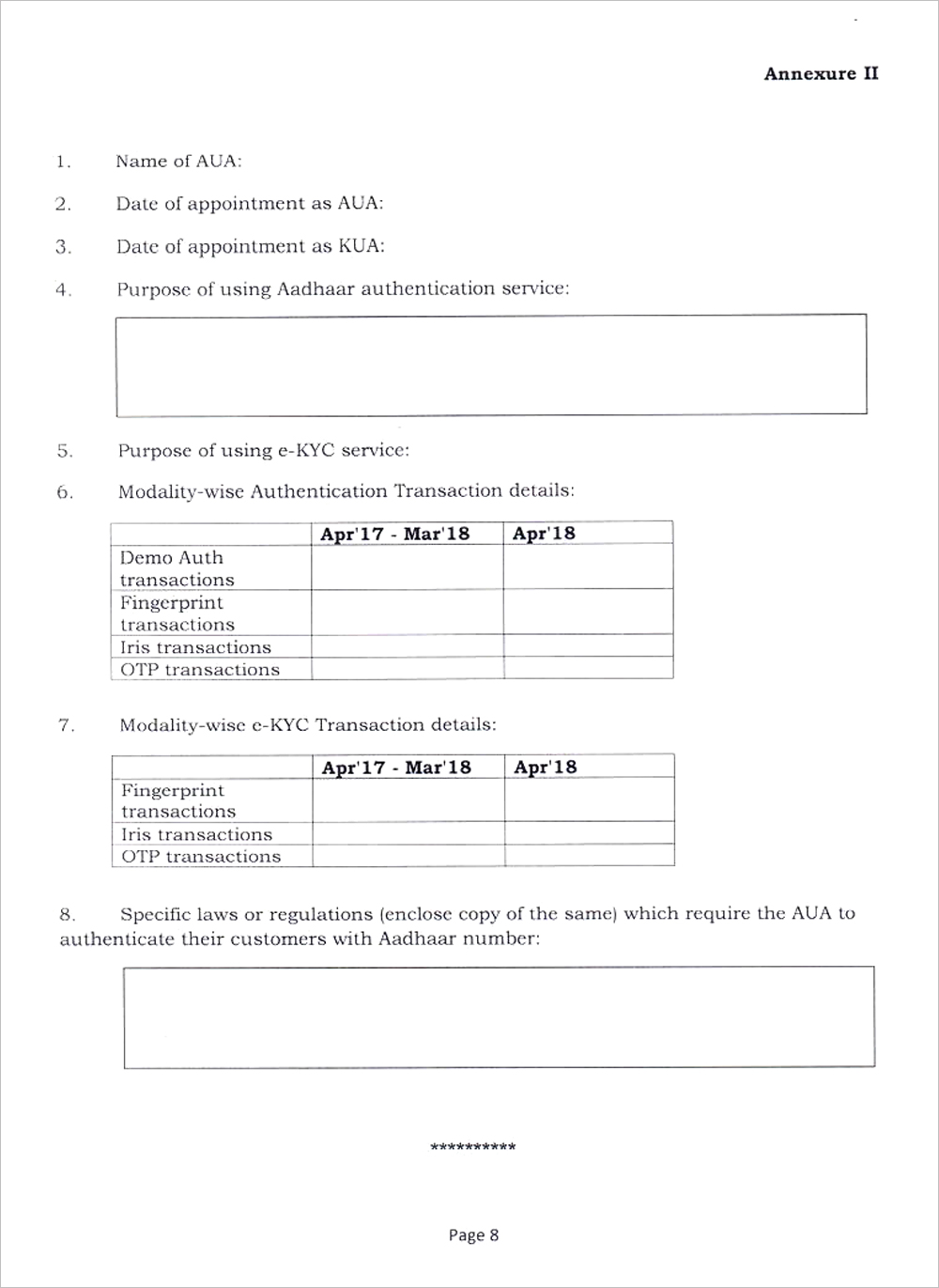