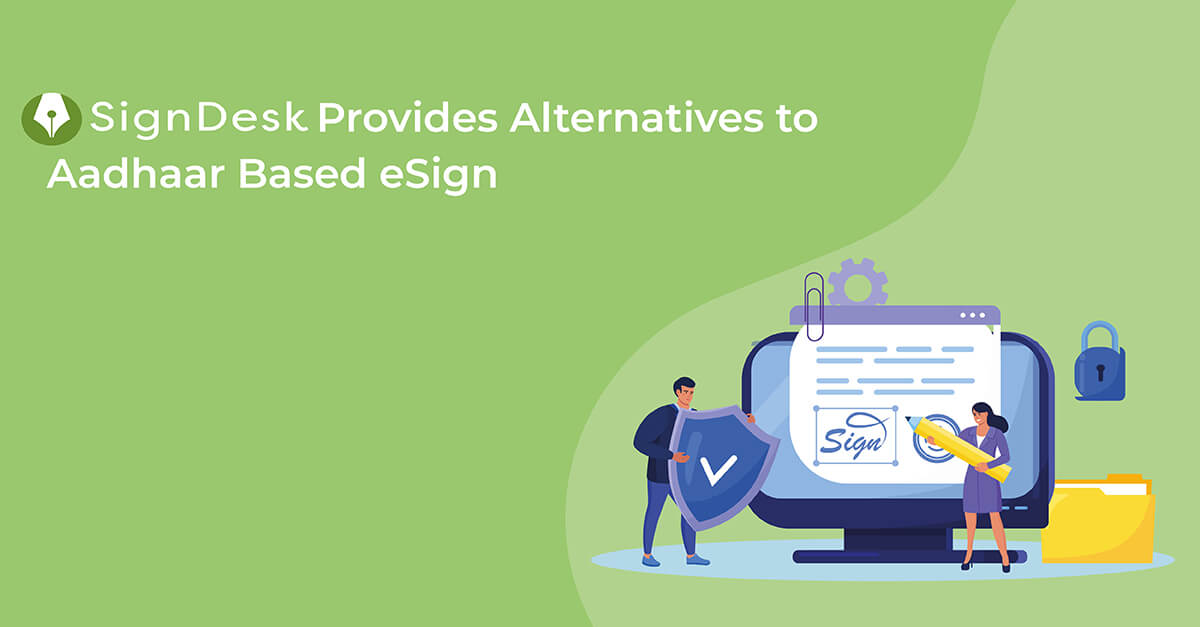 The Aadhaar based eSign which required the signer to make signatures using their Aadhaar data and either biometrics or an OTP verification through their registered mobile number proved to be extremely convenient. Industries like FMCGs, Banking, Finance, Insurance, and even Human Resource departments in various companies have integrated eSign to digitise documentation workflows making them dependant on electronic signatures.

Proposed Alternatives for the Aadhaar eSign

Digital documentation service providers are researching alternative eSignature solutions. SignDesk is also exploring various avenues to innovate substitutes for the Aadhaar based eSignature. Some of the proposed solutions by SignDesk include the offline Aadhaar XML based signature, Bank KYC based eSign, and Aadhaarless eSign.

This signature is a hardware signature, wherein a Digital Signature Certificate (DSC) is embedded in a USB Token. It makes use of the PKI (public key infrastructure) to create the signatures and can be accessed through a computer to sign documents in bulk electronically.

SignDesk currently offers this solution, you can contact us to know more about the USB Token based Signatures.

ESPs are working on developing an offline Aadhaar based signature solution where the signer uploads the Aadhaar XML containing their demographic data, photo, and phone number (if it’s available). The Certifying Authority (CA) then verifies the data before creating and including it the person’s eKYC account. This solution is expected to go live in a few days.

This an eSignature solution that is proposed by SignDesk that does not involve Aadhaar. It is dependent on one’s email ID and phone number. The method is widely used in countries abroad.

In India, the Indian Contract Act, 1872 recognises the validity both Oral and Written contracts. The Information Technology Act, 2000 legally recognises electronic records and states that in situations where the law requires information in writing, typewritten form or printed form, such information can be provided in an electronic form provided that the information is compliant to the law. The proposed Electronic Signature solution by SignDesk would follow this process.

The system will maintain the Audit Trail of the transaction which will be attached to the document along with a Certificate of Signature Completion.

SignDesk is working on building these solutions and making them available soon. However, until then the existing USB token based signature solution that utilizes Digital Signature Certificates (DSC) remains a stable option.  Contact our sales team to know more about our digital signature solutions.