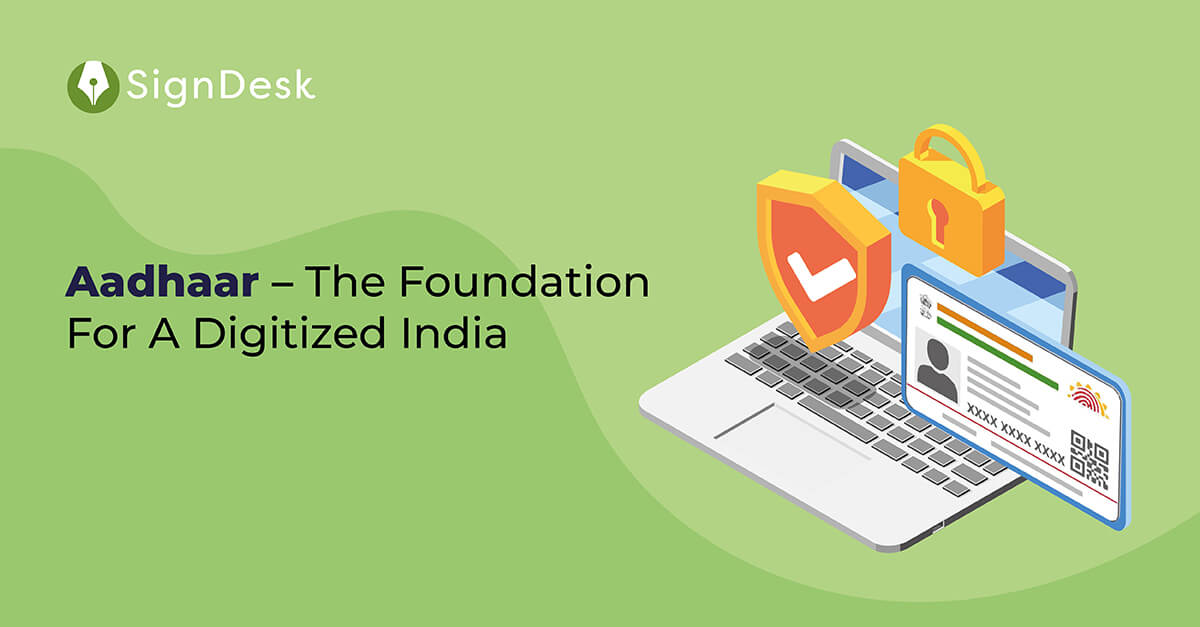 Out of India’s 1.3 billion population, the Aadhaar initiative has successfully issued cards to an astounding one billion!

And to imagine the number of business or other opportunities it could open for people, we should all be looking at the new IT rush!

It is not about the ease of business alone, but instead about taking a step towards a bigger social change.

It hints at revolutionizing our health, education, crime and many other sectors. Possible with the amalgamation of schemes such as Digital India, and Skill India, with the Aadhaar initiatives forming its very core.

Being the largest of all National Identification Number Projects ever undertaken, we have done a pretty neat job at gathering the number of cards this far. All of that when the Aadhar was not mandatory.

Apart from people’s eagerness to breaking down the already overburdened bureaucracy, it also highlights our digitizing ambition. This aims to put a hold on spiraling corruption.

So, what does the Aadhaar promise for India’s future? Can it really revolutionize the way we access government reforms and policies?

Defined aptly in Nandan Nilekani’s own words, as ‘rebooting’ rather than revolutionizing; he and Viral Shah have co-written a book named, “Rebooting India”. The book explains on reaping the benefits of a digitized India, fully realized when Aadhaar forms the very crux of central policies and distribution systems.

Our systems of issuing IDs have the impediment of using different IDs for different purposes. All of which have the aspect of defining your identity through, one, ‘what you have’ and two, ‘what you know’.

However, as opposed to a Credit Card or a Ration Card, an Aadhaar becomes the representation of who you are.

It merges the requirements of ‘what you have’ and ‘what you know’, into ‘who you are’, now possible through biometric scans.

Thus, Aadhaar becomes the representation of who you are. Also, contrary to the intangible aspects of issuing an ID for every subsidy you acquire. You begin to access government services through tangible and comprehensive tech which enables you to identify electronically.

A previous attempt at securing a database in the form of The Social Security Number (SSN) provided in the US has many running parallels to Aadhaar’s UIDAI (Unique Identification Authority Of India) program.

Documentation of such mammoth proportions has been miraculously conducted all over India, though the initiatives deriving relevance from the UIDAI is yet to be launched.

But this is one avenue where we can harness the power of all our schemes, targeted at various groups of people. Such as, avoiding fraudulent voting practices, nabbing criminals, or entrance examination frauds.

Once implemented, creating a fake voter profile would become so complicated that no would-be election rigger would bother trying, as told by Nilekani himself.

Also, he doesn’t forget to mention how Aadhaar can enable registration for voting. This also goes as far as providing the opportunity of casting one’s ballot from a smartphone.

This centralized database can also help nab criminals by verifying fingerprints. This will help the Criminal Branch inch closer to a quick fix when approached a dead end.

How Aadhaar Contributes For A Digitized India?

The technology backing Aadhaar and the UIDAI scheme echoes the very realization of the dreams of Modi’s digitized India.

Though the initial application of schemes through Aadhaar wasn’t without defects. When the technology becomes flawless and accessible, the possibilities that open-up for our government and business alike are numerous.

Here, it is not a zero-sum game that will negate the advantages of the populace by making it easier for the capitalists or the business circle. Instead, it introduces a more democratic setup which enables everyone to access all kinds of benefits. The government(State and Union) and market together introduced this setup.

What’s In Store For Us?

The benefits listed ahead are yet to be realized fully. This is mostly due to the lack of proper legislation in place that rules out the doubts in the minds of the general populace.

Aadhaar (Targeted Delivery Of Financial and Other Subsidies, Benefits and Services) Act, 2016, when implemented can pave the way for the transformation from a rigged and stagnant bureaucracy to an empowered, digitized India.

We are very proud to be one of the first bunch of startups to have come up with the idea of commercializing the e-sign service.

What consumed an awful amount of time with the inclusion of connecting a dongle for the sake of replacing a wet signature, is now realized with just an Aadhaar number

With a single e-signature costing as low as ₹ 25, it is not limited to the circles of huge enterprises who engage in partnerships with the government, but down to every common man with an Aadhaar number and a debit/credit card! Try our service now!