What Is Virtual ID and How to generate one?

According to the circular issued by the Unique Identification Authority of India (UIDAI), a Virtual ID is a 16-digit exchangable number that is mapped to your Aadhaar number.

To avail services from an agency, Virtual ID must be used instead of the Aadhaar number.

While it is certainly important to ensure that Aadhaar holders use their identity to avail a product or service, the storage of Aadhaar numbers by various private players and entities has raised issues regarding the Right To Privacy. 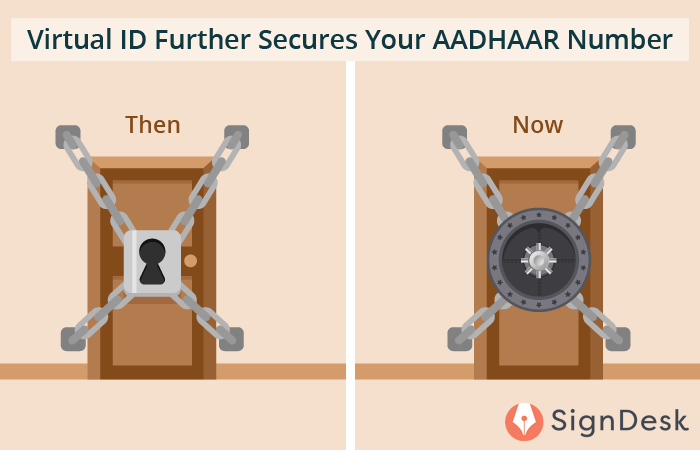 Any Aadhaar holder can log onto the UIDAI website to generate their VID, which will be valid for a defined period of time, or till the user decides to change it.

You can generate as many VIDs as you want. A new Virtual ID cancels the old one, once generated. You can also generate/replace VIDs on the Aadhaar mobile app and at enrolment centers.

How Does Virtual ID Work?

For instance, once you give your Virtual ID to an authentication agency (Government agencies and telecom companies). They will enter it into the system and receive a UID token. This authenticates it and provides limited demographic details such as name, phone number, and address.

Thus, these agencies will now be able to authenticate you without seeing your Aadhaar number.

The security of Aadhaar data has been a subject of debate ever since the idea was floated under the UPA government.  Meanwhile repeated allegations of leaks have eroded public confidence.

The limited KYC system along with the Virtual ID might go a long way in allaying the nation’s doubts.

In order to counter the problems surrounding Aadhaar data leaks and increase the security, Virtual ID attempts to add an extra layer of security. This makes the agencies difficult to access your Aadhaar number.

Virtual IDs and UID token received by the agency confirms the mapping of Aadhaar number.

To facilitate their services, each agency is provided with a Unique Identification Token. This token helps them facilitate the required Aadhaar number and the sale of the products.

A recent case regarding Aadhaar data leaks was when a payment of ₹500 was made by The Tribune on Paytm to investigate unknown groups that sold Aadhaar numbers of individuals via the payment gateway.

As a result, this investigation busted an online racket that sold Aadhaar numbers where an unknown source provided details of individuals.

Apart from this, an additional ₹300 was paid by The Tribune that provided a feature to enable printing Aadhaar cards after entering the Aadhaar number of the individual.

In order to counter the problems surrounding Aadhaar data leaks and increase the security, Virtual ID attempts to add an extra layer of security by making it more difficult for agencies to get access to your Aadhaar number.

Availability Of Virtual ID In India

Have you created your Virtual Id number yet? Drop your comment if you find any problem with your VID number generation.