Home / Aadhaar / The Role Of Aadhaar In Busines ... 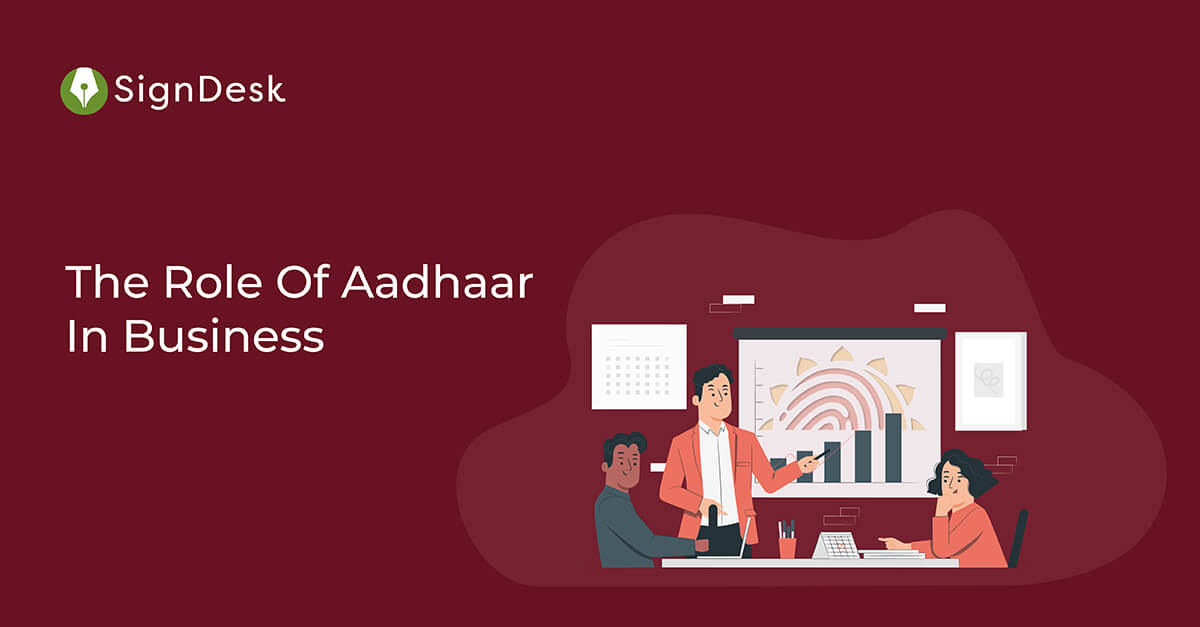 The purpose of this article is to understand how Aadhaar is being currently used and integrated into everyday life. At the same time, to know how Aadhaar can be incorporated into businesses and other sectors of the economy.

The following article will help you understand how Aadhaar is used and integrated into everyday life. Also, you will see how Aadhaar can be incorporated into businesses and other sectors of the economy.

Since the launch of the Unified Payment Interface (UPI), the main objective of the Government has been to move towards a cashless economy.

With the help of the Aadhaar based Unified Payment Interface, an individual can make a purchase without anything but just with his/her Aadhaar number and/or biometric print.

The merchant who requires money will have to facilitate the interface to enable the transaction. Aadhaar linked bank account of an individual shall make all the payment.

The only drawback would be that two individuals may not be able to transact between each other without a scanner.

National Payments Corporation of India (NPCI) developed a Mobile App called Bharat Interface for Money (BHIM). This is a type of UPI that facilitates online payment through Aadhaar based systems.

Aadhaar has been adopted in the Indian banking system and financial markets and since demonetization, the growth and use of Aadhaar enabled payments has been tremendous.

A system related to the welfare scheme that facilitates the seamless transfer of all payments to the beneficiary resident. This uses their Aadhaar Enabled Bank Accounts.

AEPS is a system leveraging Aadhaar online authentication.  This enables Aadhaar linked bank accounts to be operated at any time from anywhere.

The filling of EM is not mandatory and on account of the cumbersome procedure. Due to this, many MSMEs are not registered and are outside the scope of services offered by the Government from time to time.

This process has been rectified and simplified with the introduction of Aadhaar. This also contributes to the ease of doing business in India.

Thus an entrepreneur can now file for MSME or SSI registration completely online with the help of Aadhaar.

Government offices introduced AEBAS in 2014. These are the most efficient and effective Aadhaar based attendance systems.

The purpose of introducing such systems was to check the absenteeism and late arrival of Government Officials.

Providing Aadhaar number and fingerprint of government employees is mandatory to verify their attendance in the system.

The public can access these records on the Government website. Do you think companies, startups and colleges may adopt a similar system in order to become more efficient?

Similarly, in rural-urban and urban areas, unemployment payment and record-keeping can be done.

Though Aadhaar is not essential for any provident fund transaction, it does make the process easier.

EPFO and Unique Identity Numbers (UAN) have been linked with Aadhaar. This will enable the beneficiaries to receive the amount due, directly to their respective bank accounts. All of this is done through the National Electronic Funds Transfer Program (NEFT).

Other uses of Aadhaar

Startups that require funding and investment could receive the same through their Aadhaar linked bank accounts. This will raise the credibility of the transaction and the security of the funds. This also verifies the authenticity and legitimacy of the start-up and its founders.

This would create transparency in the financial market. The investors will have access to how their investment is being spent.

Criminal history and background checks for employees will be authenticated and a matter of public record with the help of Aadhaar.

A company or startup will get notified when any person with a previously pending case, criminal history, sex offense, etc. apply for a position in the company, sign on as a user or customer through Aadhaar.

Considering the recent cases that have come to light, instead of verification through linking a phone number, Gmail account or signing up through facebook, this would be a better way to authenticate the user.

One such case was the attack on a girl in Delhi by an Uber driver. If companies and businesses employed a digital authentication system, we believe such cases can be avoided.

Sharing of customer data, storage and processing have become significant over the past few years.

This information is collected through a platform (phone, laptop, iPad) and recorded in the form of voice, photos, location, messages, etc.

How can Aadhaar help? Two small scale companies that have complementary goods and/or services and are trying to compete with established players will require sharing resources (consumer/user information). This will enable them to compare and combine diverse databases, thereby carving out a market share for themselves.

This data will be generated and shared using Aadhaar only upon acceptance of the user.

De-duplication seems like the trend considering a number of information companies are collecting and sharing user information all the time.

Banks, the election commission, etc. can also use Aadhaar. That is to clean up databases by removing redundant and multiple entries that cause complications.

Banks, Credit Rating agencies and Non-Banking Financial Corporations can avail the use of Aadhaar to streamline and screen the loan application process.

If a person’s bank account is linked to their Aadhaar account, then all previous credit transactions and loan history (sanctioned and unsanctioned) should be made available to the creditor or agency.

This will ensure that any loan application will not default on their loan or interest payments. Also, the number of loans issued to dubious and suspicious people with a questionable credit history will be minimal.

A few gaps that still exist (in India) are in the form of a lack of Medical infrastructure, inefficient medical records, lack of medical insurance records, etc.

The birth records and medical history of an individual should be accessible via a person’s Aadhaar number/account. for convenience, during accidents, etc.

Also, any disbursements that need to be made to the Public towards health or medical can be done directly to an individual’s Aadhaar linked bank account.

Payment of Taxes and Compliance by individuals and companies alike, through Aadhaar based systems, seems like the next logical step for the Government.

In fact, the Government has plans to make Aadhaar mandatory for the filing of Income Tax returns by linking all bank accounts to an individual’s Unique Identity Number.

Even companies could integrate into this system and pay employee taxes collected at source and company tax payable through an Aadhaar-enabled system.