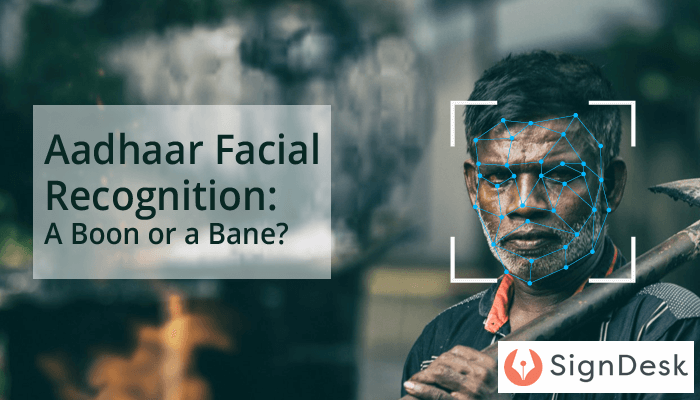 The Unique Identification Authority of India (UIDAI) pushed back the face recognition rollout for Aadhaar to August 1, 2018. The facial recognition roll-out came about after problems in the biometric authentications with the fingerprints and iris scans.

How Does Aadhaar Help Services?

Based on the Aadhaar Act 2016, there are several requesting entities that submit the Aadhaar number and demographic information of individuals to the Central Identities Data Repository (CIDR) for authentication. Authentication User Agencies (AUAs) authenticate user information while providing Aadhaar Enabled Services. These agencies could be government, private or public and they enable services or business functions.

These requesting entities like AUA, KUA connect with the CIDR through the ASA (a contractual service). Here, the Personal Identity Data (PID) capture the Aadhaar authentication which is encrypted and is never sent over a regular network. The sole objective of the Indian entities is to provide unique identification systems through the source code and proprietary technology with foreign entities. On the contrary, there are some bodies that argue that this electronic architecture allows the state to carry out real-time surveillance of all of its citizens.

UIDAI provides Software Development Kits (SDKs) or Registered Device services in a number of operating systems. Using this, you can capture the face image and create a digitally signed and encrypted authentication input.

The other major petitions that garnered a lot of coverage were filed by S.G. Vombatkere, Aruna Roy, Kalyani Menon Sen, Mathew Thomas and Rajeev Chandrasekhar.

Helping the Millions of Beneficiaries

Earlier this year, UIDAI CEO, Ajay Bhushan said, “We are trying our best to have this released from August 1st.” The much awaited launch has been postponed due to the complexity of the procedure. This being a fusion mode would help insure that those beneficiaries that lost out on their due would be recognised with the ‘Face ID.’ This will help the millions of Indian workers and manual labor force that have eroded fingerprints due to their work and ensure that this limits authentication failures and ensuring the beneficiaries get their due.

A recent UIDAI tweet suggested that there are 4 crore authentications that are done daily, 1,500 crore for authentication, Rs. 90,000 crore saved by removing fictitious beneficiaries. Based on the last count, there are 121 crore unique ID holders. The IT ministry had 60 crore citizens that have linked 87.79 crore bank accounts with Aadhaar. To this day, Rs. 4 lakh crore has been disbursed through the direct benefit transfer as he assured to make Aadhaar ‘robust.’

At the same time, the Supreme Court continues to refer to the biometric authentication failures that have deprived citizens of their rightful entitlements like Provident Fund and Pension. This is highlighted with people who are mentally challenged or have physical disabilities. UIDAI looks to leave no stone unturned to secure Aadhaar information and ensure that the beneficiaries get their due.

Earlier, the roll out was planned by the UIDAI CEO to be introduced from July 1, 2018. The plan was to get all users to ring-fence their bio-metrics by visiting the official UIDAI website or the app by entering their respective Aadhaar number. Also, the Aadhaar holder should have a registered mobile number to avail this service. After the lock clicks into place, the system is enabled and the biometric request allows for a physical lock that blocks unauthorized access. This gives the user, the access to unlock their choice of transactions and lock it once again. Once the biometric locking system is enabled, it remains locked unless you choose to unlock it or disable it altogether.

At this junction, to further strengthen his case, Ajay Bhushan Pandey, CEO of UIDAI drew upon the court’s attention to the Aadhaar (Authentication) Regulations of 2016. Aadhaar number and demographic information matches with that of the CIDR (Central Identities Data Repository). After which, there would be a One Time Pin (OTP) based on authentication of a limited period validity. This PIN would be sent only to a registered mobile number and email address of the Aadhaar number holder. Since there are several multi-factor authentications, there is a combination of two or more modes that provides biometric or OTP or demographic data that is finally used for authentication.

Aadhaar has unlimited purposes and is used for limited purposes sanctioned by law. Later, UIDAI said, “At the time of Aadhaar enrolment, a photo of the face of the resident is also captured. To provide inclusive authentication, face photo can also be leveraged to verify the identity of a Aadhaar number holder.”

This additional data would be saved and added to the fingerprints and iris authentication. Currently, the face photo is available on the UIDAI database where there is no requirement to capture new data. Here, the UIDAI taps into its database to enable this feature. This works with biometric device providers that integrate face modality into the Certified Registered Devices. You can also submit your facial recognition details on the UIDAI website and through the mobile app.

Choose SignDesk.com For All Your Aadhaar-based Solutions

Whether you are looking to eSign your documents or create eMandates with our eNACH solutions, SignDesk.com has a host of products which several business pride themselves on. This being said, the facial recognition authentication would pave the way to connect with businesses in Tier II and Tier III cities.

With close to 4 crore authentications happening daily, you are sure to find that your business should be Aadhaar-enabled to take on several services like on-boarding new clients, digitally stamping and created easily editable eMandate services.

What do you think, Aadhaar Facial Recognition Feature will prove to be a Boon or a Bane? Let us know in the comment below.