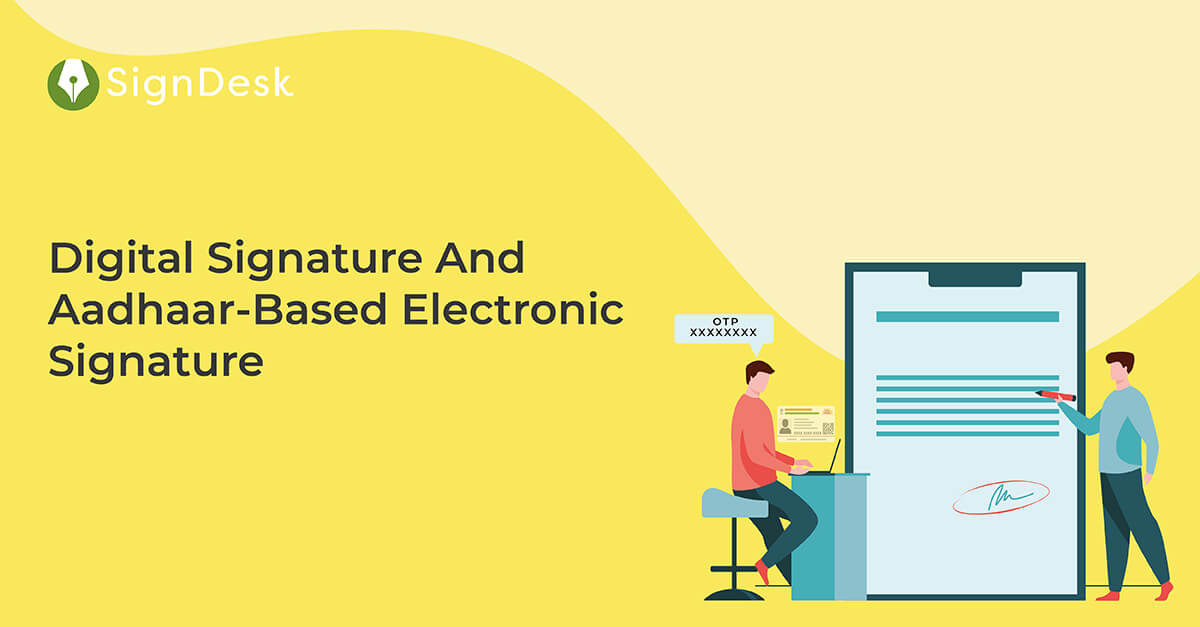 A digital signature can be viewed as a fingerprint or a coded message that is unique to both the document being signed and the signer. It binds both of them together.

If we recall, a handwritten signature also does the same thing. However, in the digital signature case, this is being done electronically with no paperwork involved.

A digital signature is considered equal to a handwritten signature.

Just as a person’s identity is attached when signing a paper document, digital signature too acts as a binding commitment and attaches the identity of the person signing it to the document.

The real value is in saving time and avoiding the paper, and keeping your data electronic.

How does Digital Signature Works?

Digital signatures are based on cryptographic technology. One can generate two mathematically linked keys using an algorithm. These keys are called private and public keys.

To create a digital signature, signing software creates something called a hash of the electronic data to be signed. This hash is then encrypted using the private key.

The digital signature consists of this encrypted hash, a hashing algorithm along with some other details. You may notice that it is the hash that is encrypted instead of the entire document.

The reason for this is that a hash function by its nature gives fixed-length value output for any arbitrary input, which is usually much shorter.

So instead of encrypting random length document, it is considered easier to encrypt fixed length hash. This saves time since hashing is much faster than signing.

The main feature that makes a digital signature unique from a handwritten signature is that the hash of any data is unique.

Any change in the input data results in a different hash value. This inherent feature of hash makes validating the integrity of the data very easy and secure.

This can be done by decrypting the hash using the signer’s public key. If the decrypted hash matches another hash of the same document, it proves that the data hasn’t been tampered with since it’s signed.

If the two hashes do not match, the data has either been tampered with in some way or the signature was affixed using a private key that doesn’t correspond to the public key presented by the signer.

In either case, the fraud has been detected at a very early stage.

Thankfully for us, the Government of India vide its Gazette Notification (REGD. No. D. L. 33004/99 dated 28th January 2015) has announced a new initiative that allows Certifying Authority to offer eSign or digital signature service to citizens who have Aadhaar number.

This initiative takes care of all the three issues highlighted above.

India took a great leap of faith by implementing the Aadhaar programme through which every citizen of India is being assigned a 12-digit unique identification (UID) number.

Originally implemented to make the subsidy target of Government of India more transparent, Aadhaar has, over the course of time, opened new avenues to reform other areas of governance.

One of them is the area of digital signatures.

How Does Aadhaar Bridge The Gap?

The way this whole process works is very simple. First, a person with Aadhaar number uploads his document to an eSign service provider’s portal (SignDesk.com), to get it digitally signed.

Next, he enters his Aadhaar number and gets a one time password (OTP) to his mobile number registered with Aadhaar. Then he enters the OTP in the field provided.

In the backend, validation of the user is carried out using Aadhaar service and a key pair (a public key and a private key) is generated for the user and an eSign is affixed to the document using the private key.

Not only this, but the person can also share the eSigned document to another person for further signing.

The invited person can also eSign the document in the same manner i.e, by entering his Aadhaar no. and OTP sent to his mobile, from any remote location.

Thus, we can say that eSign is the way forward for a secure and time-efficient way of signing documents.

Built on top of the foundation laid down by the Unique Identification Authority of India (UIDAI), it authenticates the user securely and provides a seamless interface to digitally sign any document.

Leveraging the power of Aadhaar, SignDesk has come up with a one-stop solution for digitally signing all your legal documents.

You can upload your document, eSign it using Aadhaar and invite other people as well to get the document eSigned.

To simplify the process for small businesses and for people who want just a single signature, SignDesk has a separate pricing structure based on the number of eSign requirements of different entities as well.