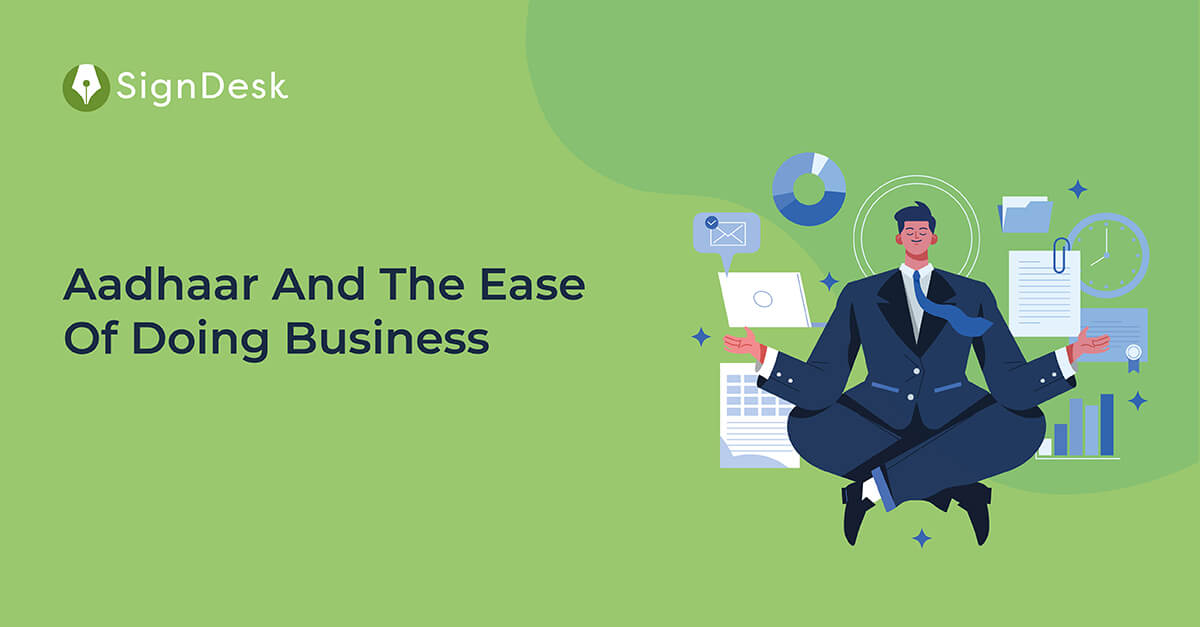 You may have heard of e-signatures, recently pioneered by enterprises like our own, SignDesk; this serves as a perfect example of what a service like Aadhaar could do for the Startup universe. It opens up avenues that would have been unthinkable without the assent from the Government. Like Mr. Nandan Nilekani, the former Chairman of the Unique Identification Authority of India (UIDAI), perfectly summed it up during the launch of SignDesk (paraphrasing), “Internet took its current shape because of the service being provided by the government in the first place. Now it forms the majority of the services in the world market, creating millions of jobs, easing everyday activities and becoming the true embodiment of globalization”.

Another apt example would be the GPS system, initially enabled by the US Government, later came to be central to the way people traveled to new places or used cab services. The analogy here is rather obvious, where the government will empower its market sphere by introducing an innovation such as Aadhaar, and the Startup universe comes up with new ideas to commercialize it and turn a government incentive into a marketable product.

With digital signature, nothing short of a Public-Private Partnership (PPP), we have started taking baby steps towards reaching new technological heights in India. And we are definitely here to stay!

Signing Is All About A Few Clicks!

E-signing is the next big cool tool to land in people’s hands, especially those employed in the business sector. In a globalized, ever-connected and wired world, we meet and interact with agents, clients, fellow workmates on Skype and over varying time zones at an alarming frequency. The tension over consensus and other formalities can now be fulfilled online. A seemingly insignificant process after digitization can work marvels for parties at both ends of a transaction.

Our newest venture uses the UIDAI’ scheme, fancily called the Aadhaar, to sign documents online. Whether you are the only party that has to sign a document or a document due to be signed by multiple parties, all you have to do is upload the document into our well-guarded servers by registering with us, and share the signed document among the relevant parties.

While the signing is a fairly easy and quick procedure, one has to wait for the verification of the same to be completed. This prevents forgery, not to mention other benefits like user-friendliness, cost-effectiveness and legally recognizable security it carries with it. This venture, given the green signal by the man behind the Aadhaar himself, Mr. Nandan Nilekani, aims to put the entire process of legal documentation on the cloud! Besides LegalDesk.com, which provides customizable legal documentation at the click of a button, we have now expanded to signing the very documents online we helped you create. Currently, we are also the only startup to draft legal documents, pay Stamp Duty, procure Stamp paper as well as deliver documents home. We went a step further by avoiding you the pain of gathering witnesses on a particular date and time, by launching SignDesk, through which you can eSign your documents online.

Here is a short video on the procedure behind e-signing –

A Zillion Documents – One Repository!

Aadhaar’s one of the other successful initiatives includes the Digilocker. The name should be obvious enough for you to provide enough information into its functions. It is a repository for all your documents, or rather e-documents. A place where you can also esign the uploaded documents. It is virtually no different than any other private cloud services like Google Play or iTunes; while they let you store digital media, Digilocker lets you store and share files/docs. This service comes from the Department of Electronics and Information Technology, under the Ministry of Communications and Information Technology. Initially providing you a space of 10MB, this storage space can be extended to 1 GB or more. Having a locker for all your marks cards and other crucial documents can in the long run completely replace the use of papers and facilitate the digitization of proofs. This leads to a hassle-free, paper-free, and hence, eco-friendly environment that has the potential to speed up the process of any and all kinds of applications in a cost-effective manner.

‘Aadhaar economy’ will eventually be the buzzword, when we successfully incorporate Aadhaar services into the private sector, an example of which you can see through SignDesk

‘Aadhaar Diffusion Project’ undertaken at the time of inception of the Aadhaar number, aims to improve the quality of public services through Public-Private Partnerships. This can only happen when there is enough awareness among the youth who have the potential to be entrepreneurs, possessed with a storehouse of ideas to convert a government-enabled service into a marketable commodity. Nasscom (The National Association of Software and Services Companies), also part of the Indian Information Technology and Business Process Outsourcing Industry is looking towards educating and spreading awareness on the multi-faceted utilities Aadhaar can provide. It holds developer conferences, boot camps, app contests and hackathons through disseminating the service benefits and consequently nurturing them into developing new IT platforms.

Challenges in incorporating these may be huge, but the benefits that people – rural and urban can derive from it can easily negate the impediments along the way.

Through the empowerment of Aadhaar, many business enterprises can see a bulge in their customer reach, more so for the telecom companies, for they can integrate their systems into Aadhaar’s and provide an SMS-based authentication process.

Private enterprises or parties after fulfilling certain conditions can partner with Aadhaar, sign contracts and dole out policy benefits or carry out enrollment services. For these ideas to see the light of day, the ‘Direct Benefit Transfer’ must invite and encourage private parties into working with them. Not to forget the NGOs which can play a crucial role in terms of reachability into remote rural areas.

The newest innovation witnessed in the telecom industry is the case of ‘activation of SIM cards’. What was obscure and took indiscriminate duration for verification, now can be done instantly with an Aadhaar Number. After the clearance of the rules regarding e-KYC (Know Your Customer) for the purpose of biometric identification, Bharti Airtel took the lead in launching instant activation of SIM card services. Also, Vodafone India and Idea are to follow suit in the coming days. Through such innovations, we are taking our first steps towards a digitized India, which will substantially reduce public spending on manual verification and paper-based documentation. A study conducted, stated that paper verification of identity cost Indian Telecom Services up to ₹ 145 to ₹ 175 on each customer which now shall be wiped off the balance sheet entirely!

Yes, indeed! Among the blues of some claiming Aadhaar as being vulnerable to the exposure of private data, we tend to forget how much of a literal ‘support’ it can lend to our lives – be it economically, ecologically or individually. The Aadhaar Bill slated to amendments should soon incorporate privacy laws, which forms the only chunk of the block in the way of realizing a Digitized India. With more and more entrepreneurs realizing the empowering element of the Aadhaar, we will be witnessing an Aadhaar-backed IT rush very soon.

For a glimpse of this, try our own SignDesk now! Fret not, for your documents are safe at our hands, not to forget the security that an Aadhaar-based eSign can provide. It is by far the most foolproof and forgery-proof instrument to land in the common man’s hands. If you are a business owner with bulk eSign requirements, then you must give it a try. We offer different packages and eSign API integration based on your requirement.