A river loses its name as it flows into the sea. We, humans, are special though – our existence forms a unique identity, it grows into eternity. Aadhaar supports the identity of each Indian with a 12 digit number issued by the Unique Identification Authority of India (UIDAI).

An interesting event happened at Bangalore in the July of 2017 – Three mentally challenged kids were reunited with their long-lost parents.

Narendra, Omprakash, and Neelakanta were 3 differently abled kids in an orphanage in Hosur. Their lives witnessed a miracle when the UIDAI team in its drive of enrolling them for Aadhaar found they were already registered, for good.

It took very less time for the officials to then trace the kids to Indore, Jharkhand, and Tirupati respectively. One can feel how thankful and blessed the parents should have felt. Aadhaar is definitely starting to prove its mettle.

The one-off event being said, the unique ID number has been envisioned to authenticate and empower the identity of every Indian citizen. Here are 6 ways in which the unique identification number  is set to transcend the Indian economy:

1. Welfare Programmes Shall Have A Better Reach

It is an open secret in our country how even the most privileged manage to eat into the benefits given to the poor and needful. With the help of digitization, the government is in a much better position to deliver subsidies only to the intended.

2. A Boost To Banking Sector

Education being limited in rural and remote areas directly hampers awareness of the benefits of banking. Jan Dhan Yojana enables these people to open a bank account with only Aadhaar number as identity proof.

Also, the Aadhaar card number is used as a KYC (Know Your Customer) document by banks across India enabling the banks to verify identity and address of the person thus making it a dynamic instrument in the banking sector.

Following are a few benefits of linking Aadhaar to the bank account.

3. Pensioners Need Not Run From Pillar To Post Anymore

Jeevan Praman is a scheme that ensures easy delivery of pension, Upon linking the banking and Aadhaar information the authorities can easily find all relevant information to make the disbursal seamless.

4. Accepted As A Proof Of Identity Throughout India

Most services from private or the public sector demand a valid ID proof. Things like getting a passport or an LPG connection is now a lot less time-consuming. Also, the LPG subsidy is directly credited to your bank account after linking unique identification number with your distributor.

Finance Minister Mr. Arun Jaitley has mandated that Aadhaar must be linked for income tax returns filing. Taxpayers who try to find a way to evade tax by using multiple PAN cards and such tactics are in a way, handicapped.

Also filing Income Tax Returns has become considerably easy as taxpayers who were used to a very elaborate verification process until recently are being verified very quickly thanks to linking Aadhaar and registered phone numbers.

6. Convenient Transactions At The Consumer Level

After Demonetization, a lot of payment apps surfaced and a new medium of transaction was now popular. In our Prime Minister Narendra Modi’s quest for greater digitization, the government has launched a smartphone app,  BHIM – Bharat Interface for Money.

BHIM is the government’s move to facilitate payments in a fast, secure and easy manner. The app can be installed on any Android / IOS  supported smartphone.

Needing to enter only the Aadhaar number to process payments makes this usage of this app seamless and secure. Yes, users don’t even need to know the phone or account number of the recipient! Over 130 lakh people have already started using the app, apparently.

While that seems convenient, people who cannot afford a smartphone are not left behind too. Aadhaar Payment App is another medium through which only the merchant or the recipient of payment needs to have a smartphone.

11 Must Know Facts  About Aadhaar 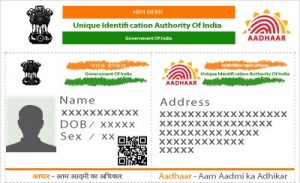 The footer on the front side of the card states Aadhaar – Aam Aadmi ka Adhikar which translates to Aadhaar – Common man’s Right.

A need for a unique identification number was envisaged after the Kargil war in 1999. The Unique Identification Authority of India ( UIDIA ) was formed in 2009 under then Prime Minister Shri Manmohan Singh. Infosys co-founder Mr. Nandan Nilekani for his vast expertise in the IT industry was chosen as the head the responsibility in July 2009.

99 percent of India’s adult population are reported to have a unique ID number as of July 2017. Although it received backlash from various quarters initially, Aadhaar is now being seen as a major instrument of evidence for identity and also for availing the many government benefits and subsidies.

‘For every minute spent organizing, an hour is saved’. said the great Benjamin Franklin.

For all its vastness, the unique ID promises to bring in a significant organization to our  Indian economy despite a few inadequacies/allegations like fake issues and privacy concerns.

Very clearly, there is an air of certainty when one shows his / her Aadhaar card as a proof of identity wherever necessary. One can only hope such certainty passes onto every process of our booming economy.