Home / eMandate / What is eMandate and How eNACH ...

First and foremost, let’s see what is eNACH or eMandate and how they are different?

As far as the end result is concerned, both serve the same purpose but are implemented differently.

eNACH is the electronic process of helping the banks, financial institutions and other government bodies to provide automated payment services.

Once the user signs the eNACH or electronic NACH form, he gives permission to the concerned authority to debit the said amount from his bank every fixed day of the month.

How it all came in place?

India has been on the path of digitization since the 1980s when the first computers were launched here. Then came the era of net banking followed by mobile banking.

Now, Aadhaar is providing the basis for giving over 1 billion Indians undeniable access to not just government benefits but also various services provided by banks and other NBFCs.

World Bank predicts that a 10% increase in the Broadband Internet penetration will result in 1.4% GDP growth in India.

Pursuant to this, the Government of India is initiating various internet-based services, like Aadhaar based eSign, eStamp paper, etc, to steer the economy and the country towards a totally digital platform. eMandate(Digital Mandate) is the latest in a series of such initiatives by the Government of India to modernize the Indian economy.

eMandate is a facility initiated by the Government of India through the National Payment Corporation of India (NPCI).

A mandate is a standard instruction that you provide to your bank or other institutions like your phone service provider to automatically debit the instructed amount from your bank account. The mandate is also known as NACH (NACH stands for National Automated Clearing House).

Now until now most banks and companies process this mandate as follows:

This entire process takes somewhere between 7-14 business days depending on various factors. This time span results in various business delays for the Company/Bank, inconvenience for the customer and cost involvement on all ends.

e-NACH process has been set up to solve the above problems. With the advent of eNACH, the need to fill NACH form has been eliminated.

When using electronic NACH, the process can be completed within a few hours, since the entire system requires minimum human interaction and logistical dependency is very low.

Now, It has the following entities involved: 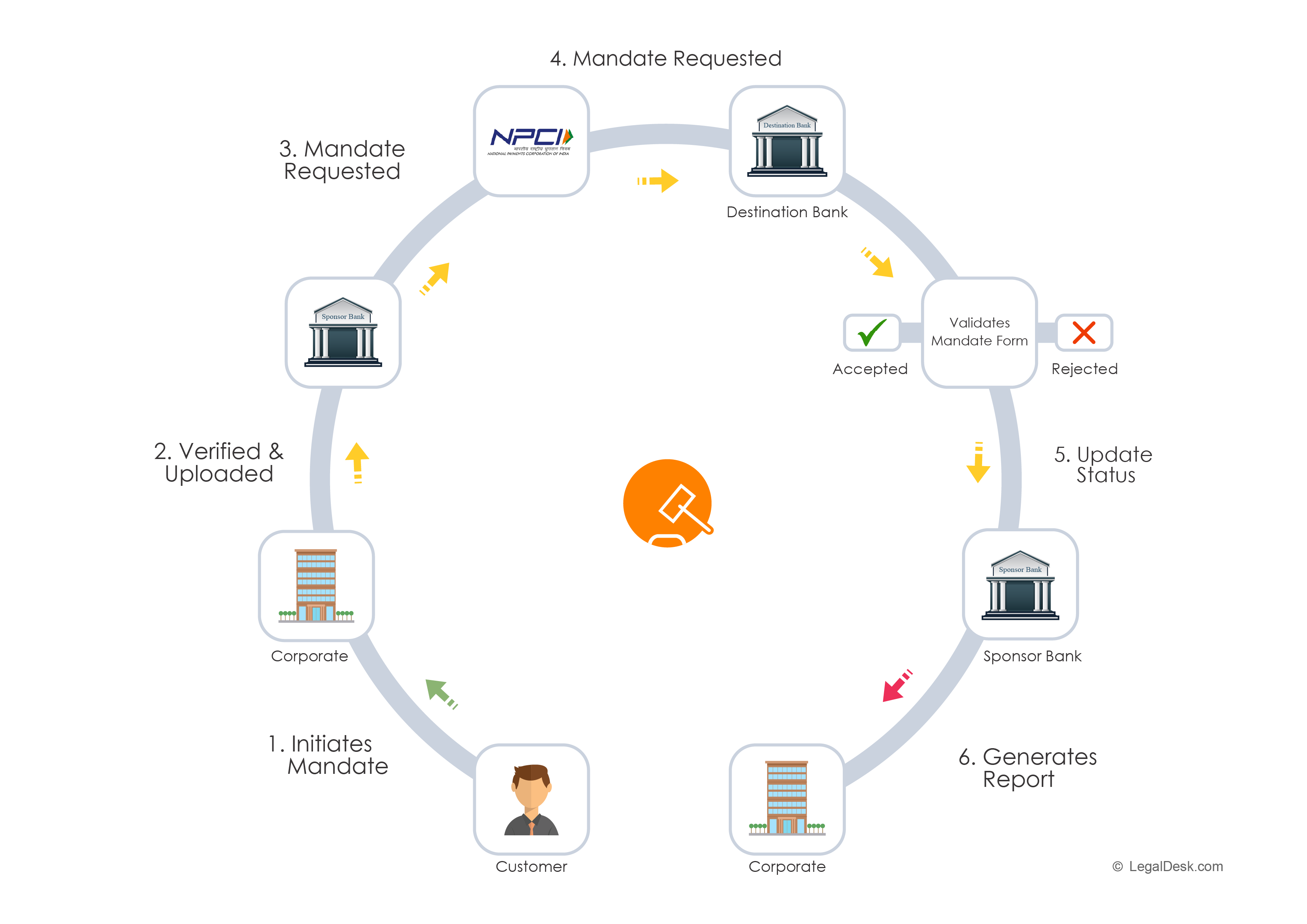 The e-NACH/e-Mandate system assists in the issuance and confirmation of mandate by the customers through alternate channels to paper-based mandate.

The primary objective of eNACH/eMandate is to reduce the burden of processing on the destination bank, therefore all the aspiring participants on the eMandate platform should implement end-to-end process automation including auto submission of authenticated mandates to the NACH system.

NPCI reserves the right to allow participation in the eMandate process depending on the readiness of the bank to process with full automation.

eNACH is one of the newest methods of electronic payment and thus is still in the early stages of adoption. There are around 10 banks that have already adopted eMandate and more are getting in line.

Are you still using the paper NACH form? Try our electronic NACH/MANDATE service.