Home / eMandate / What is eMandate and How eNACH ...

Despite being used almost interchangeably, eNACH and eMandate are two separate and different processes with the shared objective of making recurring payments easier using payment automation and a digital framework.  As far as the end result is concerned, both serve the same purpose but are implemented differently.

eNACH or National Automated Clearing House is an electronic process of helping financial institutions, including banks and NBFCs, and various government entities to provide automated payment services.  eNACH is built by combining all the Electronic Clearing Systems (ECS), which lenders previously used to auto-debit money from borrowers.

When utilizing eNACH for debit or credit, users digitally sign the eNACH form and generate a Unique Mandate Registration Number (UMRN). Once the eNACH has been initiated, eNACH functions as permission granted by the user to the concerned authority to debit an agreed-upon amount periodically.

eMandates, on the other hand, are slightly different from eNACH.

What is an eMandate?

A mandate is a standing instruction given to the bank where a customer holds their account to debit a fixed amount to another bank account automatically.

Mandates are offered in 3 forms –

Differences between eNACH and eMandate

While both eNACH and eMandate offer similar payment automation services, there are a few differences between the two processes.

eNACH is a digital framework controlled by NPCI (National Payments Corporation of India), used by nearly all businesses and individuals to automate periodic payments.

eMandates, on the other hand, are standing instructions provided by individual customers to auto-debit money from their accounts for various purposes, including bill payments, subscriptions, loans, and more.

India has been on the path of digitization since the 1980s, when the first computers were launched in the nation. This resulted in the rapid digitization of finance, resulting in the era of credit cards and net banking, followed by mobile banking.

Recently, Aadhaar has been instrumental in providing over a billion Indians with valid digital identities and consequently access to social and financial services.

The eMandate facility is among the most beneficial digital services initiated by the Government of India through the NPCI.

As mentioned previously, mandates are standard instructions provided to financial institutions and several other types of businesses, including –

The manual mandate process is as follows:

This process takes between 7-14 business days depending on various factors and has a high failure rate, resulting in fragmented payment processes. Additionally, this time span results in long and frequent business delays for the Company or Bank, inconvenience for the customer, and massive expenses.

API or eSign eMandates expedite these debit and credit workflows, enabling payment completion within 3-4 days at a low failure rate.

The e-NACH eMandate process has been set up to automate recurring payments while removing the need for paperwork. With eNACH eMandates, the need to fill the NACH forms and convey NACH paperwork from bank to bank is eliminated.

When using electronic NACH, the mandate registration process can be completed within a few hours since the entire system requires minimum human interaction and logistical dependency is very low.

The following entities are involved in the eNACH process: 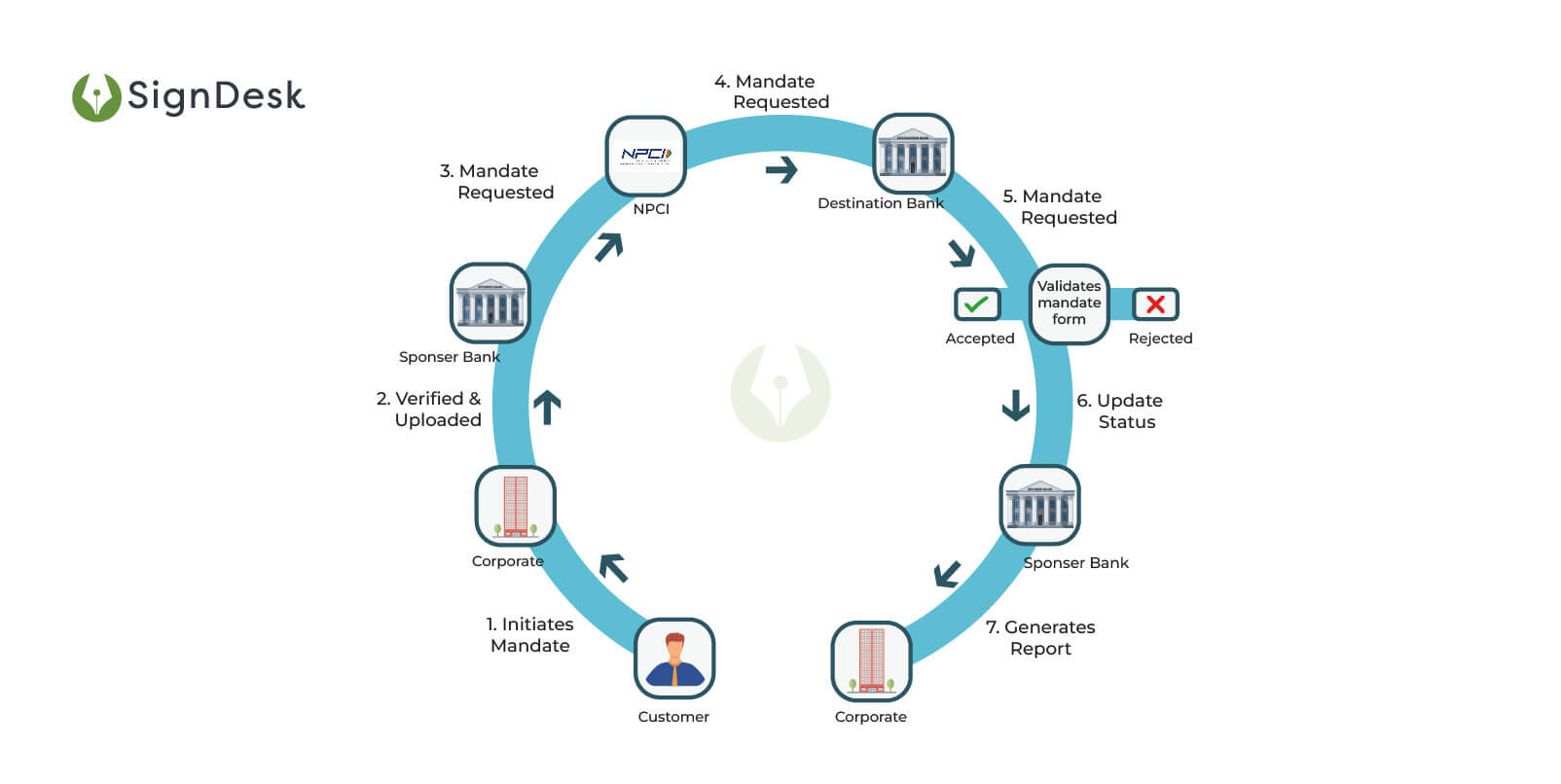 The eNACH eMandate system assists in issuing and confirming by the customers through alternatives to paper-based mandates.

The primary objective of eNACH/eMandate is to reduce the burden of processing on the destination bank; therefore, all the aspiring participants on the eMandate platform should implement end-to-end process automation, including auto submission of authenticated mandates to the NACH system.

NPCI reserves the right to allow participation in the eMandate process depending on the readiness of the bank to process with full automation.

eNACH is among the newer methods of electronic payment and is still in the early stages of adoption. Several banks and NBFCS have already adopted eMandates to automate recurring payments and have experienced reduced processing times, faster payment cycles, reduction in expenses, and improved efficiency.

Are you still using the paper NACH forms? Try our electronic NACH/MANDATE service and automate your recurring payments with ease.